I share with you part of an interesting article in Knowledge, which proves once again human greed and how far we fall into relationships of animals. 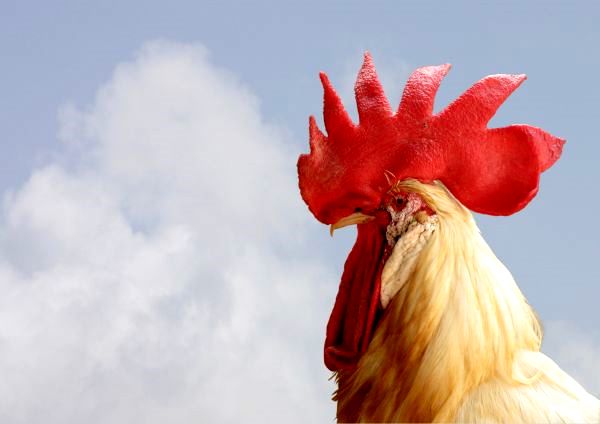 If hens rebelled, they are an army, but they do not. Instead tolerate the conditions in which they are placed - clipped wings, too much food and premalko attention. Just walk in space, their allocation - steel floor, surrounded by bars, which are exposed to constant light.

Very few people see these chickens, but our eyes are evidence of their existence - neat rows of large chicken breasts and legs in supermarkets. One can see other things - hundreds of thousands of white feathers fallen from chickens transported from a farm to inevitable doom.

Once there were no chickens, but their wild ancestors who lived in the jungles. In today's bamboo forests of India and Southeast Asia are still very feral descendants of these birds. They run like miniature Velociraptor, razritvat fallen leaves with her strong legs and peck whatever you like.

Grouse sleep high in the trees with their heads under their wings, protesting loudly if disturbed. Among their enemies are cats, pythons and hunters.

In a time before at least 8,000 years, people have begun to carry chickens in their villages. It was not clear, but it is unlikely to be used for food.

In just the past five years, researchers have found that women prefer men who provide stronger scream when fear fall for males with larger crests. These "wild" morals are preserved and domesticated descendants. To this day, all chickens fear even the shadows of hawks, many are picky about their partners and are organized in a strict social hierarchy. In addition, chickens are smart in their own way. For example, can store up to 100 chicken "faces", an ability that is necessary to know who the leaders are.

Ultimately chickens are grown because of their beauty. In Japan was established breed with 2.75-meter line and the scream of another breed lasts for 90 seconds. The greatest diversity of species, however, is designed in Victorian Britain.

The biggest change in the lives of chickens Industrial Revolution. Then comes a change in values ​​and whims of culture were replaced by the mantra "more for less money." First chickens move in closed barns, then began to subject them to constant illumination and trample them with food.

We kept chickens in certain genes and "outcomes" are so prolific that the planet are more chickens than people.

Today's factory chickens are twice larger than their predecessors of the jungle and lay more eggs 80 times a year.

Is it fair? Life in tightly arranged cells is too far away from the forests of India.