Which would you choose for a friend, what would you eat? Why?

Although some historians and anthropologists say that man has always been known as being omnivorous, our anatomical structure - teeth, jaws and digestive system - is more suited to a vegetarian diet. And on the subject of protein, Dr. Paavo Airola, a leading expert in the field of dietetics and natural biology, confirmed: "Studies in many countries have shown clearly that man does not need a large amount of proteins and everyday norm, which is needed is not more than 30 to 45 grams. Consuming larger doses of protein is not only unnecessary, but also cause serious damage to the human body. Moreover, it can lead to fatal diseases such as cancer and cardiovascular disease, osteoporosis. "

In order to obtain 45 g proteins per day, did not have to eat meat. Vegan diet consisting of grains, legumes. nuts, fruits and vegetables provides a fully human protein its requirements.

With a high content of proteins differ cereals, legumes and nuts. A peanuts and lentils contain more protein than the same quantity of sausages, pork or steak.

The majority of vegetarians are people who have understood that to contribute to peace in human society, we must first get rid of the tendency to violence. Hundreds of thousands of people in search of truth have become vegetarians among them such men as Pythagoras, Socrates, Plato, Leonardo da Vinci, Sir Isaac Newton, Voltaire, Benjamin Franklin, Jean Jacques Rousseau, sings Tolstoy, Mahatma Gandhi, Albert Einstein and many other great men in history. 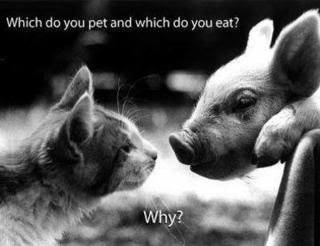 Nowadays many people are relieved with the thought that animals were killed today in "humane" ways and remain deaf to all arguments that prove the immorality of the meat-eating., Animals that are bred to be slaughtered, lead unnatural, painful existence . born through artificial insemination, they were subjected to brutal castration and hormonal stimulation, fattened up unnaturally with poor food, long carriage in unbearably harsh conditions awaiting them eventually died. Tight Wagons, electric prods and panic terror which constantly live - it's an integral part of most modern methods of farming, transport and slaughter. Let's close our eyes and just protest against cruelty to animals in the last moments of their lives, so we have very vague ideas about the meaning of "human". The truth about the slaughter of animals is not pleasant - first pronizatelno roaring animals brought into a state of unconsciousness, then hang them on the legs and using mechanized conveyors drove them to the factory of death. When they cut their throats, and flayed skin, they are still alive, buried in blood. hard for us to understand why the conventions governing the treatment of domestic animals and laboratory mice not extend above the farm animals who are cruelly maimed and killed in slaughterhouses. 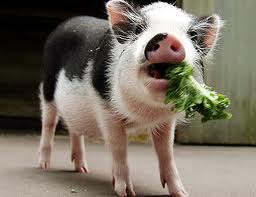 Meat from pigs happy - better go and see how they are happy.